Today I Cleaned a Glass-Top Stove

And now for something completely different!

I have been working on my March goal of spring cleaning and I realized I had a fun opportunity to share some of my “life hacks” with the world. By “life hacks” I mean things that I do to make my life easier because I’m a lazy American and working is hard.

So welcome to JOSH AT HOME! A new category of post where I talk about stuff happening in my home. Cleaning, decorating, casually crying while eating an entire bowl of spaghetti, YOU NAME IT!

Having spent a majority of my life in the Boston area, I’ve only really known life with gas stoves which (to me) are pretty easy to clean and maintain if you keep it up. (I don’t know why I felt the need to specify living in Boston. I just feel like gas-stoves are a very north-eastern thing?)

When I moved into my place in Florida, I was faced with something new- a glass-top stove which I both love and hate. It makes me nervous because the cats love to jump around on the counters and I know Burger has hit the hot surface a few times here and there.

At this point I’m certain they’ve all learned a lesson about this because I don’t see them on that side of the kitchen that often but it’s still nerve-wracking.

I’m also notorious for putting things on the hot surface without thinking about it. I’ve melted many a mixing bowl and plastic bag in my day!

That said, welcome to HOW TO CLEAN A GLASS-TOP STOVE!

I regularly clean the stove top with Weiman Cooktop Cleaner which I found when trying to figure out how to keep the damn thing clean. Windex didn’t seem like a smart idea and, it turns out, it’s not. Windex contains ammonia-hydroxide and it can A) scratch the stove and B) if you don’t clean it up properly you risk heating the ammonia and releasing into your face while you cook.

While Weiman has been a great regular cleaner, I’ve noticed a build-up of gook that wasn’t going away, even with some hardcore scrubbing. 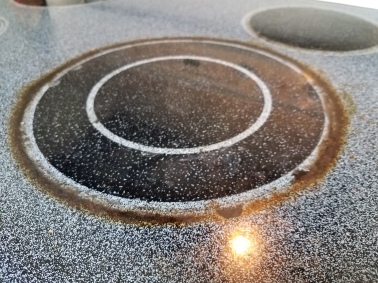 So I turned to the internet for help.

I discovered that white vinegar and baking soda were the answers to my prayers (aren’t they always when it comes to cleaning?).

Here’s what I did:

STEP ONE: Wipe down the entire surface with the white vinegar. This removed any debris and grease on the stove-top.

STEP TWO: Covered the entire area with some baking soda. I resisted the temptation to cut into it like cocaine just for laughs. I realized I was alone so only I would really find it funny. 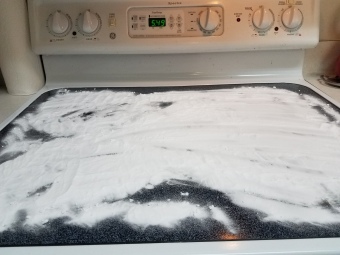 STEP THREE: Grabbed an old bath towel and soaked it in some hot water. I always make sure to have old bath towels on hand for just this reason. You never know when you may need it!

STEP FOUR: Wring out that bad boy and lay it over the stove-top. I left it there for about 20 minutes (while I started writing this)

STEP FIVE: Remove towel, roll up your sleeves and get ready to scrub! Using the same towel I scrubbed the living crap out of the stove, using the baking soda to my advantage. I also used the towel that I had cleaned up the vinegar with, taking advantage of the cleaning aspects of the science-fair reaction that was occurring on the stove.

STEP SIX: There was still some gunk around the largest burner (the one I used the most). I scrubbed until it hurt and then used a razor blade to (carefully) try and remove what the baking soda wouldn’t. I will admit that this burner is still rough-looking but my arms were hurting so I threw in the towel. I’ll get it again next time as I plan on repeating this in a month or so to try and finish the job.

STEP SEVEN: I made one last pass with some vinegar and then buffed the whole thing down with a dry cloth.

And there you have my adventures in doing housework.

6 comments on “Today I Cleaned a Glass-Top Stove”