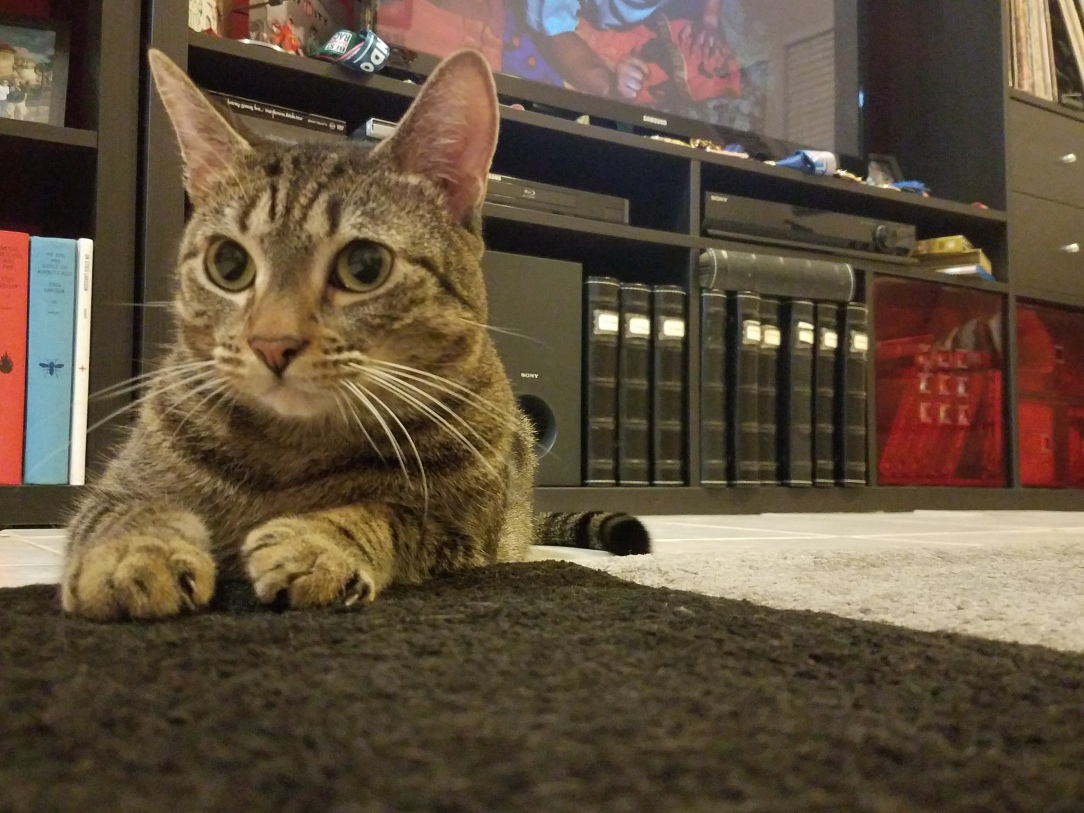 Yes Officer, I’m Aware That We Don’t Put Cats In The Dumpster

So I’m definitely going to start this whole thing off with a meme that has been making its way around the Facebook world over the last week and I pretty much love it- not because I (so far) have a problem with 2018, but I like it because the idea gives you a little bit of time to shake off the last of 2017:

Granted, I know that comedy was the intention of whoever wrote this but I’m going to go ahead and take the idealist approach.

Not my normal bag.

Maybe I’m growing as a human.

I am coming off the heels of one of the longest depressions I’ve been through in a while. It started sometime back in November and I have finally seen the light at the end of the tunnel. I know it came about around the time of Avengers out in California which was a roller coaster trip for me. I felt miserable most of the time and had a series of panic attacks over the weekend.

This all carried through the holidays where I stopped sleeping normally, stopped taking care of myself, my house, just about everything.

The house suffered the most.

I was totally going to post before and after pictures but I’m so embarrassed by how bad things got, I’m going to refuse. I’m not talking hoarders bad but I’m sure I could have had some sort of TV special.

After the madness of Dopey weekend I was definitely feeling better and while I’m not 100%, I knew it was time to get my act together.  With my day off today, I decided it was time for a “getting my life together montage.” Turns out, things don’t actually happen that fast so I’ve spent the day cleaning.

Since things felt so overwhelming in terms of the mess, I decided to break the whole thing down into sections of the house, working from the front back.

I started with the front door.

I needed to replace my locks since I am an idiot. I locked myself out of the house and had to break in and my doorknob didn’t survive that process.

Thankfully I’ve become an expert at changing locks since I’ve moved into my condo and this was the fourth time I’ve done it in the four years I’ve lived here. Once after my first roommate left because I didn’t trust that he didn’t give out a copy of the key (he was not the smartest and we lost many a parking pass to his hook-ups) and again the last time I had to break into the house (I’m not proud).

For the record, my condo is on the third floor so just climbing through a window is not an option. My neighbor does have my spare key but they never seem to be home when I decide to lock myself out of the house.

The last time I had to change the locks was after my stalker incident back in 2016.

Anyway. Lots of cleaning was being done.

Now, once a year, I replace the cat litter boxes with all new ones. While I do clean them regularly, they get gross over time and need to go. With three cats in the house, they get pretty dank over the course of time. I typically give them a year or so to live their best life and then off to the great landfill in the sky.

Rather than dumping the boxes just to throw them out, I decided to just take them to the dumpster with litter and nastiness all included. Didn’t think much of it. Threw them into the trunk of my car and went off to the dumpster.

Turns out, two covered litter boxes, at night, look an awful lot like pet carriers. Also turns out, I have really nosy neighbors.

I parked the car and popped the trunk, not realizing either of the above.

One of my neighbors was working out in the club house where the treadmills face the mailboxes and dumpster.

Running with a view.

She was on the treadmill and was watching me. In the darkness it looked like I was pulling pet carriers out of the trunk and since they still had dirty litter in them, they had some decent heft.

See where this is going?

I toss the boxes into the dumpster to the sounds of this woman running at me full speed and screaming. I slam the door shut and she is SHRIEKING at me.

“What the hell is wrong with you?!” She screamed in a pitch I’m certain on dogs heard?

“I’m taking out my trash, what’s the problem?”

Since I make it a point never to fight crazy, I removed myself from the situation. I got into my car and drove back to my parking spot.

She followed me. Followed me up the stairs to my condo. Right to the front door.

Thank god for the new locks.

She screamed through the door.

About ten minutes later there’s a knock on my door. Through the peep-hole I see a man at the door. I open it up to an off-duty police officer who happens to live in the complex.

I was annoyed that he had been bothered when he wasn’t even working but grateful that she hadn’t actually called 9-1-1 because that would have been embarrassing and excessive.

He seemed just as annoyed with the whole thing.

I explained that I was throwing out litter boxes as I was cleaning and had just replaced them. Thankfully my three little fuzzballs are just as nosey as my neighbors and all came to the door while we were talking.

Seeing that I was a single guy that lived alone and there were three cats, he felt satisfied that I had just disposed of two other animals. He apologized for the crazy lady (turns out, she has a history of being crazy) and left.

I decided at this point that I have had enough of cleaning so now I’m on the couch drinking wine. This will also teach me a valuable lesson about cleaning well into the night and making dumpster runs at 10:30pm.