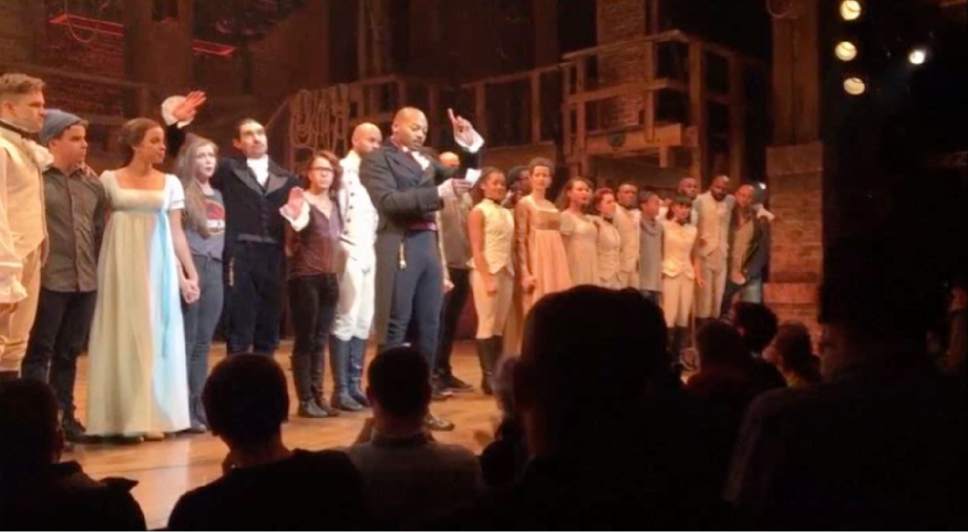 Unpopular Opinion: I’m Disappointed in the Cast of Hamilton

Okay. This is a post I’m going to have to start off with a massive disclaimer:

I am not a support of the Trump/Pence presidency. I absolutely despise them on a number of different levels. Pence is particularly frightening with his opposition to marriage equality and support of conversion therapy amongst other positions I can’t get behind.

Please don’t read this as support for either men. It’s far from that.

I don’t like them and I’m fearful for the next four years.

That being said, I find myself very disappointed in the cast of Hamilton for their actions this past weekend.

For those that don’t know what happened, here it is.

On Friday, Vice President-Elect Mike Pence attended a performance of “Hamilton” on Broadway. During curtain call Brandon Victor Dixon (the actor who plays Aaron Burr in the show) had some prepared remarks for Pence who was making his way towards the exit.

“You know, we have a guest in the audience this evening — Vice President-elect Pence, I see you walking out but I hope you hear just a few more moments,” Mr. Dixon said from the stage. As some audience members booed, Mr. Dixon hushed them and then added, “Sir, we hope that you will hear us out.”

As Mr. Pence stood by the exit doors, Dixon said, “We, sir, are the diverse America who are alarmed and anxious that your new administration will not protect us — our planet, our children, our parents — or defend us and uphold our inalienable rights, sir. But we truly hope this show has inspired you to uphold our American values and to work on behalf of all of us. All of us.”

Dixon encouraged audience members to record and tweet the interaction and they surely did. The video went viral, sparking outrage from Trump supporters (#BoycottHamilton is trending worldwide) and two angry tweets from the President-Elect.

Here’s what Trump had to say:

Now. I can’t agree with Trump’s tweets mostly because this really wasn’t harassment. No one forced Pence to stick around and listen. As usual, Trump has taken a situation and blown it slightly out of proportion.

As a side note- it’s worth pointing out that Trump continued his trend of childish behavior on social media by continuing to rant on the topic nearly 12 hours after his initial post, attacking the cast. This tweet was soon deleted but not before screenshots were taken. Here it is:

I will (quite begrudgingly) agree that the cast was, indeed, rude.

I was always taught that good theatre teaches the audience a lesson through the script and performance. Once the show has ended, the audience is left to interpret the show in their own way. Hopefully in a way that moves them to greater thought and action.

I once attended a show where the director came out and explained what he thought the show was about and the lesson we should all learn. I was so annoyed that I couldn’t enjoy the performance. Had he done the same at the end of the show, I would have been equally annoyed.

The lessons to be found in Hamilton are great and deep. The show contains a message that couldn’t be more timely in this country and does a great job of teaching that lesson on it’s on. The fact that the cast chose to single out a single audience member and beat that lesson into him, encouraging others to share this encounter, was something that should have never happened.

I think James Corden said it best during the opening of the 2016 Tony awards when addressing the shooting at Pulse Nightclub that morning. “Theater is a place where every race, creed, sexuality and gender is equal, is embraced and is loved. Hate will never win. Together, we have to make sure of that.”

Doing it right is letting the story and the script speak for themselves. Allowing the audience to take away their own lesson and message from the performance to be processed in their own time at their own pace.

Theatre is a place that allows us to escape. A place where anyone should feel safe and be allowed to enjoy the show.

There is a time and a place to share one’s opinions on the incoming administration and I honestly don’t think this was it. I completely understand where the cast was coming from. I sympathize. I share their fears and trepidation over what’s to come. I agree with them whole-heartedly. I just can’t get behind their method of delivering that message.

So that’s my two cents.

1 comments on “Unpopular Opinion: I’m Disappointed in the Cast of Hamilton”