Were LEGOS Always This Damn Expensive?

I feel the need to very much point out that nothing about this post is sponsored. I’m writing this mostly because it is 4:00am and this is what’s on my mind. I say this simply because I’m using a brand name a whole lot and it almost feels like an advertisement, but in reality, it’s because that brand name is presented in all caps and is kind of blaring in your face. That’s all. Carry on.

One of my favorite things growing up was building LEGO sets.

When I was living in Lynn, MA as a kid my room was in the basement of our house. In the far end of the basement, I had a giant table full of my LEGOS.

They were my favorite. I’m actually sad I don’t have any pictures of them, my set-up, none of it.

Every Christmas and Birthday I would ask for all sorts of different LEGO sets.

One of my favorites, the most challenging set I built in that time was the LEGO Mystic Mountain Time Lab. It’s honestly the last set I remember building as a kid. I had gotten it for Christmas (I think) and I remember building it as quickly as possible and adding it to my ever-growing world of LEGOS. 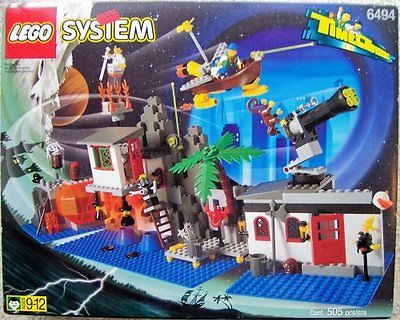 I looked it up on ebay- It’s available but pricy. I’m mildly tempted but I also have bills.

When I left Lynn to move back to California, I left behind my collection. It was, in retrospect, a very sad thing to do. I loved those damn bricks.

I remember, at one point, I created an entire ancient Egyptian landscape. There was a full-size Anubis and a pyramid that opened up.

My LEGOs remained in Lynn while I was in California and were played with by my siblings and over time my massive collection dwindled down to a small rubbbermaid container.

Eventually I took what was left of my LEGOs and gave them to a friend’s daughter. They had been sitting in a closet in my apartment right before I moved to Florida. My friend’s daughter had started getting into LEGOs and I decided that they deserved a good home. I’d like to think they’d found it.

Over the last year, I rediscovered my love for LEGOs. Erica had bought me a little Captain America set. Nothing too big, he’s on a motorcycle.

I decided to buy myself a Guardians of the Galaxy LEGO set when I was working on my book back in April. I built it as a reward for finishing my first book. Some may remember the blog post.

I was in Target one day and some smaller sets were on sale so I snagged them. After building the Guardians LEGO set, I remember how awesome it was. It also made me feel good and I missed that feeling.

I’ve held on to those sets for times when my anxiety is getting out of hand and I’m feeling stressed. I ended up building one of them tonight. 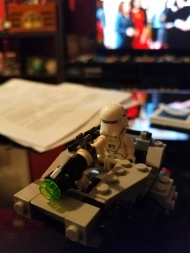 This was number four of five that I’ve had on hand which means I just have one left to build if something should come up. I could buy more but nothing has really tickled my fancy at my local Target. And nothing has been on sale.

I don’t remember that being the case.

Erica is a big fan of LEGOs as well. Her and her boyfriend Tom have a jealousy-inducing collection including the Cinderella Castle.

Recently I have fallen in love with a newer set that just came out. I call it a space puppy but in reality it’s a First Order Heavy Assault Walker. Come on now- it’s an AT-AT.

I can remember spending some of my allowance on smaller LEGO sets when I was younger. Of course I remember asking for some of the more, elaborate sets for Christmas and whatnot. I don’t remember the price.

Erica broke it down for me at some point. The price-per-piece.

But I love those damn bricks.

So, I do need to find something. I’m going to keep my eye out for cheap sets. I like how relaxed I feel when I’m working on a set. It feels good. It reminds me of a time when things were just a little bit simpler.

3 comments on “Were LEGOS Always This Damn Expensive?”