Let’s Be Mad About Coffee Shall We?

So I was ready to write about eating all of my hurricane snacks well before the storm even thought about hitting Orlando (it never really did, we got some light winds and rains) but something has come to my attention that I want to talk about instead.

True to my horrible luck, I was out of the state when the panic about Hurricane Dorian began to set in and when I flew home on Sunday morning I was a bit out of the loop. On my way to work from the airport, I decided to mobile order a drink and snack from my local Starbucks. Everything went as planned until I got to the store and found that they were closed for the storm.

Certainly a bit sad for me but it is what it is. Here’s my tweet about it:

I found it odd that they were closing so far ahead of the storm but it’s not my call and I understand them wanting to make sure that their team members were able to take care of themselves and their home.  I was annoyed because I had paid for my order and never got it. This was quickly taken care of by Starbucks Customer Service team and I was happy to have gotten my money back.

This whole ordeal of this hurricane has been full of A LOT of uncertainty as Dorian has been out there apparently following his own agenda. I have had a lot of favorite memes for this hurricane but I think this one wins: 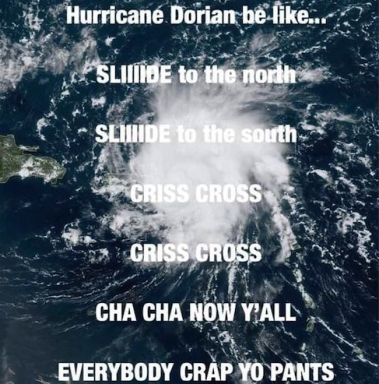 I’m laughing. You’re laughing. Everyone is having a great time… well except for one theme park enthusiast. Now I’m not overly familiar with these folks as I tend not to fall into a lot of the circles people would expect when it comes to the parks. I tend to do my own thing and call it a day. If people enjoy it great, if not, I’ll live.

Anyway- he was rather frustrated with the whole ordeal of the Bucks closing on Sunday well ahead of the storm (NOTE: while I am sharing screenshots I refuse to share links to the profile, so if you want to see more, you’ll have to look them up yourself, I’m not going out of my way to drive traffic for these people): 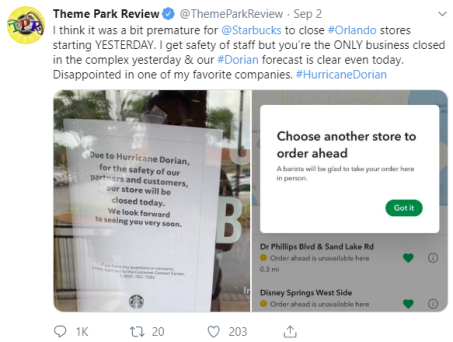 This obviously didn’t sit well with a good chunk of their 100K+ followers , particularly when he began to GO OFF on anyone who didn’t follow his viewpoint. Even when they went about disagreeing with his tangent in a respectful way:

His tactic quickly became to copy/paste a response to everyone that tried to stand up for the brand.  When he wasn’t attacking others in childish ways, he was busy bragging about his “growing” follower count:

People, including myself, really lost it when he decided to pull out everyone’s favorite, “I pay for your living” in response to a former Barista who commented that they were proud to have worked for a company that took care of their employees. In the interest of fairness I will say that the back and forth could have been handled better but regardless- this guy is tactless.

To that, I have to say this. I have been working in some aspect of customer service my entire life. I have dealt with every type of person imaginable, including your type. You know, the entitled, everything is about me type.  The ones who know they can complain and get something for it and use whatever platform necessary. Good for you, you’ve learned how to work the system. Gonna throw a slow clap your way real soon.

HERE’S THE THING THOUGH-

While I understand the frustration of not being able to get my usual Starbucks the last couple days, I understand that a good chunk of the time, when it comes to big companies, there isn’t a lot of say. I ran into a friend of mine who works for Starbucks and asked about the closer. The decision came down from the top and they did what they were told- they closed their doors.

Trust me; it’s just as frustrating for them.

And yes- Target-based Starbucks were open, theme park locations were opened, and Barnes and Noble locations were open! Why, because they are franchised and not overseen by the corporate overlords. THAT is why they are still open. Also realize that the decision was being made by people who don’t live in Florida and don’t understand hurricanes.

At the end of the day they did what they felt was best for the health and safety of their employees and I applaud them. No, I am not looking down on any place that stayed open. BOTH of my jobs remained open through yesterday though we did close early to make sure that everyone was home before the curfews that were in place in some areas.

What it comes down to is this. While I have been aware of Theme Park Review, I wasn’t a follower. My introduction to their platform was them using it to belittle their followers and trash talks a corporation simply because they weren’t able to get a coffee from Starbucks.

Congrats because apparently this behavior is a stepping stone towards presidency.

My first impression is not the greatest and in this world that means a lot. You’ve got a solid platform and following, why on earth are you using it to spread hate and nonsense because you can’t admit that maybe your little tweet was a bit much. I can’t agree with many of the thing that were said in retaliation but your stubbornness is leaving a bad taste in a lot of people’s mouths.

Is your stubborn pride really worth all this negative attention?

People who do know you are thinking twice about whether to continue supporting you. People that don’t follow you see a bully. Yeah, there are people that have your back. But are you thinking about the brand you represent or just yourself when it comes to all these attacks.

Frankly, I’m happy we were spared from the worst of it. I’m happy that we are all safe and the biggest loss is my daily latte.

There are people out there that aren’t as fortunate. Maybe use your following and platform to raise money and help those in need instead of fighting everyone.

1 comments on “Let’s Be Mad About Coffee Shall We?”