It’s Like Russian Roulette but With Peanut Butter Crackers

So as I’m writing this, I’m on hold with JetBlue. Turns out we’re going to have some weather this weekend here in Florida and while that doesn’t affect my getting up to Boston for my brother’s wedding, it does affect my getting home. For both personal and financial reasons, I don’t want to get stuck in Boston longer than I have to be.

I should note that when I say “some weather” it means that we’re looking at the strong possibility of a hurricane.

I had the idea of it on my outer radar but when I walked into work today there was some slight panicking going on, just because it’s never fun to deal with mother nature and of course watching twenty million projections to figure out what’s going to happen is annoying. 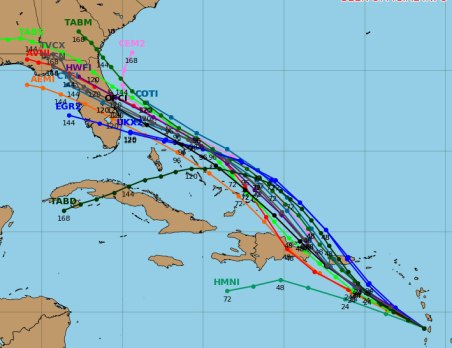 Also I just learned that these are called Spaghetti Models. So there’s something new for everyone.

See… this is an educational blog!

So here I am sitting on hold… but I’m also hungry. The only thing within reach is peanut butter crackers… and I’m eating them. Every time I shove one in my mouth I’m terrified they’re finally going to answer and I will make a fool of myself…

So basically I’m trying to get ahead of the madness and possibly change my flight back to Orlando to Sunday instead of Monday. I won’t miss the weather but I will miss the potential delays should the storm hit Orlando Monday morning.

Dear lord. So the second the thing is in my mouth, the music cuts out making me think someone answered but it was just a recorded message telling me things and now I’m choking on a cracker.

People in the office are looking at me funny.

I’m one cracker away from finishing the pack. Do I risk it?

I’m wondering if this would have been funnier if I was live-tweeting it… probably. I never think of these things until it’s too late. I swear I’m a terrible blogger. Is this why I don’t get sponsors for things? IS THIS WHY I’M NOT AN INFLUENCER?!?!?!?!

Okay, I’m out of crackers now. It’s been 19 minutes. Insanity is starting to set in…

Ok. So. Because nothing is cancelled and whatnot they aren’t waiving change-fees for flights and they have even reduced the number of airports in the Caribbean affected while we were on the phone. The very nice lady explained that everything, right now is running smoothly. Obviously that can change as the storm does what it does.

I explained that I’m going home to see family and the idea of getting stuck with them is so damn stressful I’d rather get a root canal in Dante’s Inferno. She laughed, I laughed, we’re having a good time.

HOWEVER, my only option right now is to pay for a flight change to come back to Orlando earlier. It’s $100.

This is roughly my bar budget for the wedding. So I have two options. Suck it up and play the odds OR pay for the flight change and suffer through a wedding with my family sober.

Sometimes being an adult really sucks.

I’m going to suck it up… and also keep an eye and change the second I’m able to should the opportunity arise.

The worst part of all of this is that the crackers really did nothing for me and I’m still hungry. One of my co-workers just walked in with Arby’s and now I’m jealous because that sounds delicious.

I checked, they’re too far away for any of the delivery services.

This really is a terrible day.