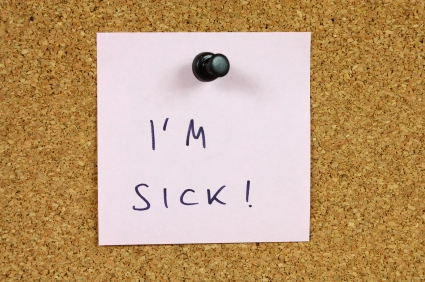 I Can Feel the Devil Leaving My Body

There’s nothing like a touch of the flu to really get things going for you, am I right?

Probably not. I’m not usually right about things.

I got bitch-slapped with the plague this past weekend and it hasn’t been fun. It all started on Friday night when I was feeling a bit iffy at work. I made it through the shift as it was a slow night on the bar but I felt off. Saturday it manifested into full-on yucky.

I ended up sleeping right up until it was time to leave for my shift which made it too late to actually call out. I hate calling out and I more so hate it when it’s last minute. I knew we were overstaffed so my hope was to convince one of the other bartenders to stay on for me so I could go home and sleep off whatever demon had possessed my soul.

No luck. Our extra opted to go home instead. Which I get but I wasn’t too thrilled about. I was running a fever and while I wasn’t exactly praying for death, I wasn’t going to say no to it either.

I felt really bad because this adorable older couple that have been coming in the past couple weeks while they were on vacation in Orlando came by to eat and say goodbye. I had been waiting on them every time they came in and they were the sweetest. The even came in the day they knew I’d be back from vacation to ask me how the cruise was.

I managed to fake being a healthy person long enough to chat with them when I could. It was there last time visiting and I didn’t want it to be marred by my wanting to curl up and die.

It didn’t help that the gross couple I mentioned from my last post came in and were being gross at the end of the bar again.

I seriously hate them and really wish they would stop sitting at the bar. You know where a great place to drink Bloody Mary’s and make out like disgusting teenagers would be? The privacy of your own damn home. Not where poor, sick Josh has to watch. I swear, if I hadn’t been sick before, I was now.

It was slow enough that one of the bar servers volunteered to close down the bar for me and I was able to go home a couple hours early. I was thankful but annoyed that it took six hours before management would let me go. I almost stayed out of spite but I was running a terrible fever and two seconds from passing out.

I was in an noon on Sunday and not feeling much better. I was the shift leader for the day so I wasn’t working as hard but still felt like crap. Thankfully the Super Bowl caused it to be dead as a doornail so I was able to leave at 5:30 rather than my schedule out time of 9pm.

I ended up in bed by around 7pm and slept until around 5pm on Monday. I ran the gambit between sweating to death from fever and freezing to death from chills. Thankfully it was a scheduled day off so I could die in peace.

Tuesday was a mixed bag. I had released my shift with the hopes of someone taking pity on me. No such luck.

I had to be in at 11 to start the day with a trainee but she never showed up and rather than figuring out what happened, I opted to go home and back to bed to sleep before my nighttime shift began. I woke up feeling loads better but still pretty drained. It was that magical moment where you can feel the devil leaving your body but he totally left some minions behind.

I made it through my whole shift without dying. Another couple that had been in town visiting and I’ve waited on a couple times came in. They are a lot of fun as well mostly because I had to teach them how to order their drink properly. Apparently she had been ordering it wrong and no one ever corrected her on it. I’m a jerk, so naturally I did. Mostly because the first time they came in this is how she ordered:

“I want a diet coke. And Bacardi tall but a single.”

The first time they came in was when I was back from vacation and not fully on my groove so what I heard was her ordering a regular diet coke and a single shot of Bacardi in a tall glass which made no sense at all. So I questioned it.

What she really wanted was a Bacardi and Diet Coke in a pint glass rather than a short, rocks glass.

I gave her hell for ordering like this which she appreciated. They were a lot of fun.

Needless to say when they came in last night she ordered properly and was quite proud of herself.

I was off again today and I have certainly spent it in bed. I tried to eat some but my appetite is hit and miss so is my stomach’s willingness to accept visitors. My biggest struggle is my cough which has gone from a dry heave to what I can only assume is my lungs trying to escape one chunk at a time.

Oh, an apparently today is my six year anniversary on WordPress. So there’s that.

2 comments on “I Can Feel the Devil Leaving My Body”