I have no idea what to write about right now. I have started and stopped this post so many times, I deserve some sort of award. I don’t know what kind of award that would be but I’ll gladly accept an assortment of fine cheeses.

Who am I kidding.

All I have is cantaloupe.

FOR THE RECORD: There are no good cantaloupe gifs. I’d like to say I tried. But I didn’t.

I’ve been feeling very antsy this week and it took me some time to figure out why that was. It didn’t dawn on me until last night when I was at work- I’m usually in California right about now.

Since 2015, I had been spending my Veteran’s Day weekend out in California for the Avenger’s Half Marathon Weekend. Because of the suspension of races out there, this is obviously not happening this year. This is actually the first time it’s really hit me that the races have been cancelled.

I certainly felt it last year as we headed into the 2017 Super Hero Half as it was going to officially be the last Disneyland race for a while. I was emotional all through the race for a number of reasons but losing the California races stung a little as it gave me an excuse to keep Disneyland on my calendar throughout the year.

I also spent most of the 2017 Avengers race weekend in high anxiety mode for reasons still unknown to me. It wasn’t a fun trip and I was actually happy when it was over.

I made it through Labor Day Weekend, when we normally would have had the Disneyland Half Weekend, without giving it a second thought, but this weekend seems to be different.

I have a number of theories. One being seeing everyone posting about the beginning of Christmas over at Disneyland. Normally I flew in the day before all the Christmas stuff started and got to see regular day ops one last time before the holidays took hold. Then it was all about the fun of A Christmas Fantasy Parade and Christmas Trolley and all that.

Another theory is that a trip to Disneyland was always a great way to end the HHN season! Avenger’s Weekend had been falling the weekend after HHN wrapped up and so I’d get to relax with a fun trip and some races.

I’m not getting that this year.

I am excited to say that I’m going to be attending the Halloween Horror Nights Wrap Party this evening. I was invited last year by Ashley-Michelle but I wasn’t able to attend because I was going to be in California. When the chance came about again this year I was happy to say yes!

I’m not a big party person and I’m socially awkward at the best of times but I’m really excited for this evening.

It’s a costume party which makes it all the more excited/stressful. I haven’t been to Hallowen/Costume party since college. There’s no need to put a number on how long ago that was, but it’s certainly been a while.

With some help I was able to throw together a costume based on the most recent Academy of Villains show at HHN. Specifically Gabe’s character, a human named Kru5ade. 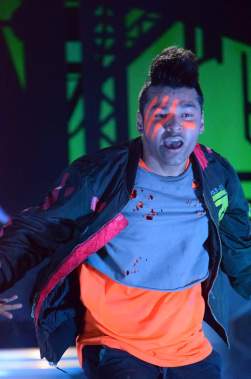 I look forward to sharing the shenanigans from the evening!

I’m gonna wrap this up as it has gone NOWHERE.