Becoming a Backstreet Boy and Making Out With Dolphins

It’s been just under a month since I went on my 3-night cruise to the Bahamas and I’d be lying if I said I wasn’t paying regular visits to the Royal Caribbean web site in an effort to plan my next escape. Frankly, if I had the money I’d jump on one of the fall deals and head out before the Halloween Horror Nights season kicks off but that’s not quite in the cards.

Doesn’t stop me from looking.

With the travel bug just eating away at me, I figured I’d take a look back at my last little adventure on the open sea!

I have to say that the process of getting on board has either changed since my first cruise, or leaving out of Port Canaveral is my new favorite thing in the world. I was super stressed about going into an unfamiliar situation but everything was super smooth. The staff at boarding was amazing and we were parked and on the boat in what felt like minutes.

After getting on board we had some time to kill so we started taking advantage of our drink package.

Much to my dismay and the amusement of my sister, I got recognized and stopped by a few people while we were hanging out and having drinks. Getting recognized really isn’t something I’ve gotten used to and probably never will. Thankfully, I wasn’t stopped in bathrooms which is my norm when I’m in the theme parks.

After we grabbed lunch we went to check out our cabin and I was finally able to reveal my big surprise for my sister. I had paid to have our room decorated!

Her reaction was hilarious as we were walking down the hallway. Several doors were decorated for weddings, birthdays, anniversaries, etc. When we stopped at our door and she saw the decorations her initial reaction was “I hope I didn’t get charged for this!”

When we entered the room I showed her the little card with my message on it. The room looked great!

Naturally this called for a ridiculous photoshoot on the bed before we had our room attendant break it apart for us.

FUN FACT: When you travel with someone with the same last name as you people will automatically assume you are married for your entire vacation. I swear to god we need to get shirts made or something.

The true highlight of the evening came from Shannon signing me up for karaoke as our night wound down. I think the drink package had something to do with it. She had initially signed me up to sing a P!NK song but as the host was scrolling to it, he landed on Backstreet Boys. The crowd decided they wanted that instead.

So I gave them what they wanted… against my will.

There, thankfully, is no video evidence of this.

The second day we found ourselves in Nassau, Bahamas where we took a tender over to Blue Lagoon Island to hang out with the dolphins. This was Shannon’s dream excursion so we did it. I was convinced that I was going to be murdered by a dolphin but I wanted to make her happy.

Thankfully, our dolphin was a sweetheart and we even got to second base.

We were in the last group to go when it came to meeting the dolphin in the water and at that point I was less stressed about the experience. Don’t get me wrong, I love the ocean and everything in it but I also happen to know that dolphins can be assholes.

I honestly can’t remember the dolphin’s name but the trainer, Rico, was amazing and a lot of fun. If you ever find yourself doing a dolphin encounter on Blue Lagoon Island, ask for him. 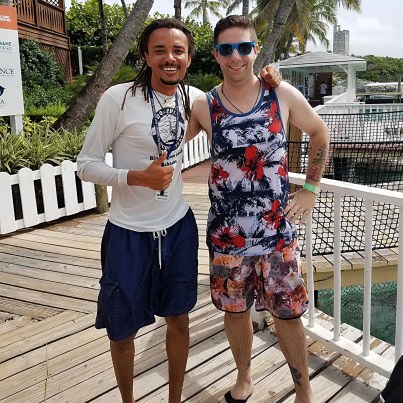 Day two was less eventful. Our port for the day was Coco Cay, an island owned by Royal Caribbean. We didn’t have anything booked and, if I’m being honest, it wasn’t all too fun. The island is under construction and it was super hot. We found some relatively shaded spots on the beach and hung out for a bit but I was feeling super anxious and ended up called it quits after we had lunch. Between the heat and the people, I was feeling really stressed out and needed an escape.

We took the tender back to the ship and Shannon hit the pool while I snuck back to our room for a nap.

After resting for about an hour I was feeling better so we headed out and managed to snag a spot in Disney Song Trivia where I pretty much cleaned house. I was back and ready for trouble!

We then hit up the casino, mostly to kill some time. Shannon took out some money and I snagged $1 from her, just to entertain myself. She ended up losing $19. I won $20. 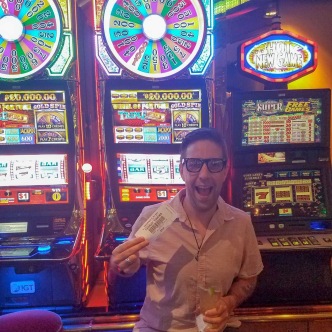 All-in-all we had an absolute blast on the trip. Shannon was completely blown away at just how spoiled we were on the boat and how nice everyone was. We really enjoyed being treated like royalty.

It all ended too fast but was the right amount vacation at the same time. It’s really hard with a cruise when you’re with just one other person because there’s no way to communicate if you’re separated so you end up attached at the hip. When it’s just the two of you, there’s only one hip to attach to.

We’re already talking about making this an annual thing, looking at the same weekend next year. I’m totally ready for it.

Will I survive until then without getting spoiled on a boat? Probably not. I’m in talks with a friend of mine to take a trip after Halloween Horror Nights and Christmas are wrapped-up since she is working both events for Universal. The trip will come right after Walt Disney World Marathon weekend which will be the perfect time for a little escape.