I Have Become One With the LEGOS

If it wasn’t completely apparent, I have recently become moderately obsessed with LEGOS as of late. Despite saying that I wasn’t going to spend the money on more of the Jurassic World sets, I ended up snagging two more of them on sale from Amazon. Now I have the full collection minus the Lockwood Estate set. I can’t bring myself to drop $130 on it, especially since I’ve fallen in love with the $100 Infinity War Sanctum Sanctorum Showdown set.

I’ve also become a familiar face at the LEGO store at Disney Springs lately. I’ve refrained some spending a ton of money but the temptation is very real.

My previous visit to the store found me playing in the “Build Your Own Lego Person” area along with my friend Ashley-Michelle. We ended up creating out “work selves” as we both work at the same restaurant. We also created a Kayla. 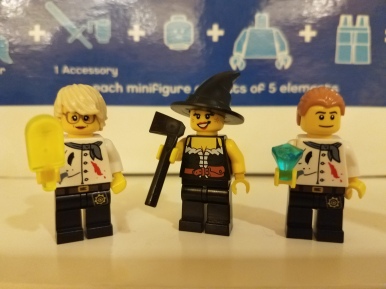 You better believe I bought them.

They currently don’t have a home so they are sitting in their package on my kitchen table. I’m considering building a LEGO version of the bar and putting us there. Who knows.

I also enjoy that I think I have that kind of time on my hands.

Considering I now have like 10 sets to build. Four of which I’ve had for month and have done nothing with. Two of them, I think it’s been a year.

At any rate, the top of my entertainment center is turning into a LEGO land. I’ve fallen in love with a lot of the store-front and city sets. They are so damn expensive though. I think it’s be really cool to create an entire city street up there. Right now it’s overrun by superheros and dinosaurs.

Who knows where my newfound LEGO obsession will get me. It’s been a lot of fun building them, especially moving to bigger and bigger sets. As of today the biggest set I’ve ever built was the Mystic Mountain Time Lab when I was a kid. The set contained 505 pieces.

Now I’ve got my Carnotaurus Geosphere Escape set which comes in at 577 pieces. The Infinity War set I want is over 1000 pieces.

Moral of the story- can I just build LEGOS all day?