Farewell Toys R’ Us: I Guess It’s Time to Grow Up

The world is constantly changing. That’s the excitement of time we live it. It’s thrilling and a little depressing all at the same time. I remember being a kid and the big excitement came from hitting the local video store, going out to eat, and spending what seemed like hours wandering the aisles of Toys R’ Us.

Our video store, Henry’s Video, is long gone along with all the other movie rental shops. They lost out to Netflix and Redbox. My family’s favorite restaurant, Players Pizza, closed ages ago and casual dining in general seems to be slowing dying as the appeal of UberEats or more novelty restaurants have captured the attention of the Instagram and Snapchat generation.

And then there’s today.

Today marks the end of Toys R’ Us.

I’ll admit, with the ease of Amazon and the fact that I have a Target right across the street from my house, I haven’t stepped foot in a Toys R’ Us in years. One did open less than a year ago right down the street from me, but I never had much reason to go.

I did wander in there last week after seeing a movie with my friend Kevin, just to check things out.

Here’s what we found: 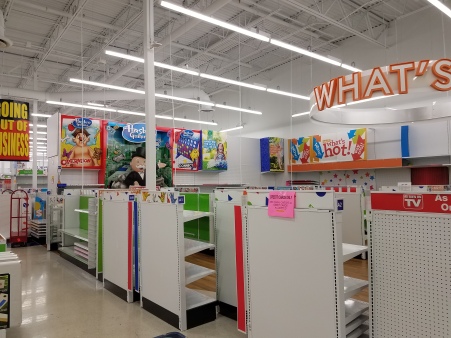 I will admit it was a bit depressing. Especially since this store had just opened about a month before it was announced that it would be closing down. It had actually just taken the place of long-gone Sports Authority.

I can’t say I’m feeling particularly sad about the closure but I guess there is that odd feeling of loss.

But I guess it’s a lot like growing up.

You fall into these habits and evolve from one to the other. So when something familiar has faded away into nothingness, you don’t really notice.

Like with video rentals. I still had my Blockbuster card when I signed up for Netflix but soon the convenience of having my rentals sent to me rather than having to fight traffic and limited selection took hold. Then came streaming. Soon, I wasn’t visiting Blockbuster anymore.

Then it was gone.

I don’t really shop for toys that often. I have been on my LEGO kick lately but I’ve been sticking to Target and Amazon for that little habit.

I don’t have kids of my own so the need for a toy store really isn’t there for me.

My life, like the rest of the world’s, evolved away from the need for a big box toy store.

It sucks to see a part of my childhood die like this but I guess we do all have to grow up at some point.

Just in case this wasn’t all depressing enough. Here’s the final farewell from the company:

2 comments on “Farewell Toys R’ Us: I Guess It’s Time to Grow Up”