There’s a lot to be said about running a marathon. As most know, it’s not my most favorite thing in the world. Erica loves them but I’m perfectly okay with running my half marathons and calling it a day. Yet, the Walt Disney World Marathon holds a special place in my heart because it was my first.

In 2015 I sat on the sidelines and watched as the winners crossed the finish line. It was exciting to see happen but I never thought I would be one of them. It wasn’t for me. At that point I had run my first half marathon and that was a feat in and of itself.

Flash forward one year and there I was at the starting line myself.

I’ve returned to that starting line every year since then.

This year was exciting because not only was I finally completing my Dopey Challenge but Andy and Carmela were doing the same, alone with their first ever marathons. My friend Heather was also running her first and I’m so proud of all three of them for kicking ass and finishing.

The morning, obviously, started off cold. Not as cold as other days but still pretty cold. I repeated my half mathon tactic with fleece PJ pants and a hoodie. I tossed the pants as normal and the hoodie left before mile one. I did wear a long-sleeve shirt which isn’t my norm but it worked for the day. I alternated between having my sleeves up and down and I’m grateful for the long sleeves.

I went into the race with absolutely no plan for the race. In 2017 I ran the race in just under 5 hours and 30 minutes. I was in far better shape then and was better rested. The goal for the day was finish in at least 6 hours. Spoiler alert: I came in at 6 hours and 13 minutes.

I didn’t much care because I had an absolute blast running the race.

I had many friends working the course so it was just so much fun to be able to see them. Sure, I can see them whenever but this was different. Though they were working, they were a fantastic support system. To have that extra smile, wave, hug is everything. Especially since cast members are often in places regular spectators aren’t.

I felt a little special having that little something extra.

My first bit of extra support came as we ran through Magic Kingdom. My friend Franni was manning the WDW Railroad and I had seen her there for the half. Knowing she’d be there for the full I made a point to stop for a photo. I hadn’t been doing this for the half so I wanted to make sure I got selfies with folks. I’m terrible at remembering to get selfies! 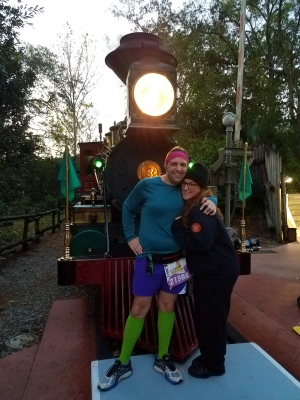 Right around the corner was one of my favorite marathon photo stops: the Malificent float from the Festival of Fantasy Parade.

So, the first bit of “characters” one will find during the marathon are the stilt walkers from the Move It, Shake It, Dance and Play It Street party. In both 2016 and 2017 my friend Conner was out there and it became something of a tradition to get my first bit of support from him in the form of a high-five.

This year he was hanging out with Malificent so it was a few extra miles but I finally got my high-five. I dragged him into the photo with me because he is easily one of my favorite people ever.

I won’t be reporting everyone I ran into but it was a joy!

The next stretch was out way to Animal Kingdom. There wasn’t much to report. Rather than characters there were long-long relics from Disney Parks past along the course. I was too cold to stop and try to take photos so I kept going.

Entering Animal Kingdom comes another of my favorite Marathon photo-ops: the cast of the Festival of the Lion King. My most favorite show at Walt Disney World.

Once through the halfway point of the race (just before Expedition Everest which was still closed when I ran through. It is true the runners can ride it but I wasn’t willing to add to my time for it, I had already lost time to a couple of the longer photo stops) we head into my least favorite part of the marathon: ESPN.

First came a stop with my favorite puppy who managed to dig himself up an impressive bone!

Then comes five miles of hell. 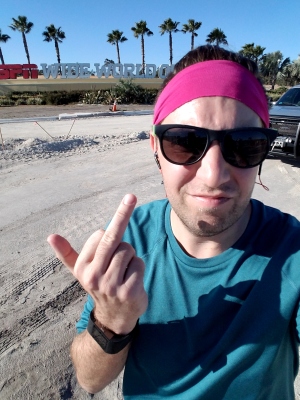 I firmly believe this photo with Joy and Sadness fully expresses my feelings in regards to running through ESPN.

Outside of ESPN I did run into a fun little cheer squad and much to my surprise spotted Jarmy who was all done up as a Patriots fan. Very unlike him so it was funny.

Following ESPN comes the final stretch, the last five miles or so.

Nothing much to report from Hollywood Studios as our time there is so brief. From there it’s off to the Yacht Club and into Epcot for the final mile.

Since I was Disneybounding as Dopey for my race I once again stopped to see Snow White who was off to the side, waving to runners. She’s the last character on course so, naturally, people weren’t stopping. They just wanted to finish.

I wanted to have fun. 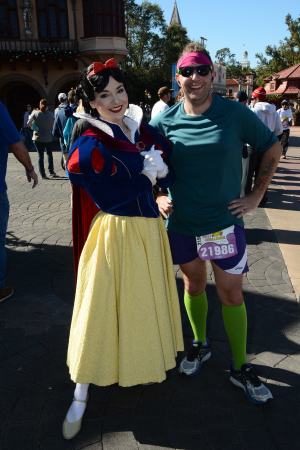 This leads me to my ultimate victory for this year’s marathon.

Last year I had told Erica and Andy that I wanted a drink from Starbucks when I saw them by Spaceship Earth so that I could cross the finish line with it. They thought I was kidding.

Then I learned that runners could cross the finish line with a more adult beverage from that parks.

I wanted a damn margarita.

A friend from back home in Boston was going to be in Epcot so I kept her posted on my progress and asked if she could throw a margarita my way. She was more than happy to oblige.

I did stop in front of Spaceship Earth for a photo with my drink but those still haven’t shown up on my photopass. I am sad.

However, there is a CLASSIC photo of me crossing the finish line with my drink in hand.

I’m tempted to hate this photo because it’s not overly flattering but you know something? I don’t care. In this photo there is so much more going on than me not being happy with my body image.

And he has a margarita which, frankly, makes everything better.

The lines to meet Dopey and Mickey were insane so I decided to visit my favorite duck who then made sure that his medal (the half marathon) was in the front.

I also paid a visit to Minnie. My good friend Monica was her attendant and it’s yet another tradition for us to have a photo together. Minnie joined us as well.

I stuck around for Andy and Carm’s finish and was so happy to see them complete their first marathons. Possibly last from the sounds of it but that’s what I said.

Who knows that the future holds for everyone in terms of what craziness we’ll get into for running but for now- we know we’re all a little Dopey.