I was totally prepared to sleep in today. I have been writing up a storm lately and it’s been keeping me up late. Last night I called it an “early night” and was asleep by 3am.

I was gonna catch up on some sleep this morning but then the cats reminded me that they were out of food.

Then I remembered I leave for New York tomorrow morning.

And that I close tonight.

So apparently sleeping in wasn’t an option.

I did manage to accomplish everything, for the most part within the hour. I ran to Starbucks (important), Target for cat food and the laundry is in the dryer now.

I still need to pack for my trip but that’ll be easy so now I’m sitting here pretending that any of this is interesting.

As for the writing.

I’ve been working really hard on my book “You’re Doing It Wrong” and I have a really good feeling that, at this rate, I’ll be done very soon. This has been a labor of love for the past decade but it’s only been this past year that things have really been rolling for me.

It’s so funny to look at the evolution of this who thing considering where it all started.

Originally “You’re Doing It Wrong” was going to be a series of comedic essays surrounding different events in my life where people were doing it wrong. After over ten years working in a grocery store, three years at the aquarium in Boston, and so many other things- I had plenty of stories.

I actually still have a folder somewhere with some of these stories. I’ll do something with them someday. Good chance they’ll end up on here at some point.

As things got rolling, I realized the many different meanings that “you’re doing it wrong” can take in the grand scheme of things and I took a step back and really thought about what that meant to me.

At the time I was in my mid-twenties and going through my “quarter life crisis” and my friend Jo would put it.

I was freaking out about adulthood and everything I felt like I was doing wrong.

I decided to revamp some things and try to expand on this idea.

This lead me to writing not only about my current feelings of doing it wrong, but also the roads that led me there.

So that’s what I’ve been up to.

Right now I’m working on revising some chapters about past relationships.

There’s been a lot of wine involved.

For more information on my thoughts about writing a book- check out this post from earlier this year.

For now, Burger is being adorable and I’m going to go cuddle with her.

Because I don’t wanna adult any more today.

Until I go to work.

UPDATE: Turns out Burger didn’t want to cuddle but Guinness was all about it: 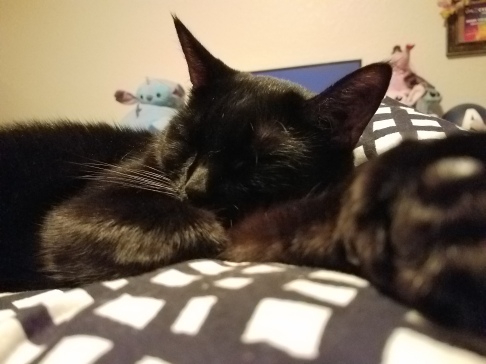 1 comments on “Just Another Manic Monday”

Feeling all nostalgic and whatnot and really missing Dark Side Weekend or whatever we were calling it towards the end there. It was my legacy race and it was so much fun. Running through the Battle of Endor, meeting favorite characters, seeing all the familiar faces of runners and cast members. There's a good chance that once race weekends return my face isn't one you'll see too often because the price tag really is too much but I'll always be there in spirit. Trust you'll still find me at out local races here in Orlando because they are all still a ton of fun (and have free beer at the end)! Sending luck and love to all the virtual runners out there this week!
She'll make you laugh. She'll make you cry. She'll make you say "What the fuck?!"
Started running again for the first time in forever. Probably this picture was taken. I'm looking forward to when we can return to these early morning wake-ups and justified day drinking when the race is over. Not sure I'll go back to paying Disney prices again but Orlando and the surrounding area has some damn good local races that I have no problem supporting when it's safe to do so again!!
Behind every great person, there is a great cat.
Advice from a Sunflower: Be bright and sunny and positive. Spread seeds of happiness. Rise, shine and hold your head up high.
She's putting on a lot of attitude for a goat that jumped into my arms and took a nap shortly after this was taken...
Loading Comments...
Comment
×
<span>%d</span> bloggers like this: