I Am A Terrible Zombie

I am very much alive and only partly dead. A Zombie if you will.

The time since the hurricane has been an insane mix of running around the country, bouncing around theme parks, speaking at schools, etc.

I have a TON to update about a no time to actually update about it. So much blog dump is coming soon though, I promise.

For now I figured I’d give you the recap of my hurricane experience as told by my Facebook status updates:

10:30pm UPDATE: still have power and water but the worst is on its way. The cats and I have taken shelter in the back bedroom for the duration. I have stress eaten an entire bag of doritos along with some flavor-blasted goldfish. The first bottle of wine has been opened and I’m watching The Devil Wears Prada because it feels oddly appropriate.

11:15pm UPDATE: Our girl shifted and she’s coming right for us. Safe room is prepped and ready if we need to move in there. Internet just started to blink so I have a feeling the power is on its way out. The next 5 hours will be the most challenging for this area.

2:00am UPDATE: It would appear that the core of the storm has moved passed us but we still have the high winds and rain with dangerous 100mph gusts sticking around until at least 6am. While we’re not out of the woods quite yet, we’re getting there.

3:00am UPDATE: the worst apparently has arrived. The wind is howling something fierce. Something rather large hit the side of the house. Not sure what it was. I walked through the house and all looks good. There will be no sleeping tonight if that wasn’t already obvious.

10:00am UPDATE: Managed to get some sleep. Still have some crazy wind. Car survived the night. Now comes the clean-up 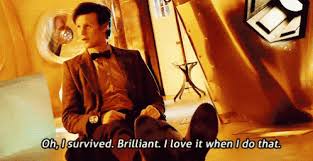 Needless to say I didn’t sleep much (at all) that night.

Frankly I still haven’t slept properly since then.

I really hope to not have to go through that again for some time.