Room at the End of the World

Life in Central Florida has been pretty damn interesting lately.

I came back from my vacation in California to what felt like a waking nightmare in the form of Hurricane Irma.

We had gotten word while we were away this Irma was strengthening and heading out way, the first Hurricane of the season for us and the first to pose a major threat since last year’s Hurricane Matthew.

I hadn’t been in town for Matthew but was grateful that he decided to swing away at the last minute and spare us the nightmare of what could have been. It would have been my first hurricane since moving to Florida and I was lucky to have missed it and luckier that it had missed us.

Irma seemed to have different plans.

The truly irritating part was coming home to find that the stores had already been cleared of essential supplies like water and non-perishable food. It was painfully nerve-wracking to think that I was going to have to go into this completely unprepared.

We have some bottled water in the house but it wasn’t going to be enough for what is recommended to have on hand for a hurricane. Typically you want one gallon per person per day for at least three days. Plus the same for each pet. The plus side was the cats aren’t as big of drinkers at dogs so if I could manage a gallon per day for them, I’d be more than good to go.

This is what I found when I went to Target on Wednesday afternoon:

What wasn’t helping my stress levels was that I was also set to be starting in a new work location this week as I transferred out of my restaurant into a new one. Thankfully they had ordered extra jugs for us to fill with water and take home.

This gave me six gallons of water plus what I already had on hand. Add in the Gatorade I bought and I am feeling pretty good.

I am also brewing some iced tea just to add some variety. Water is all well and good but I would go insane just drinking that.

Food is a bit of a different story.

Any concept of a diet was going to go out the window. Bread was not an option but tortillas will do in a pinch. I did buy some meat which I have since prepared. It’ll be the first to get eaten if we lose power but I’ll have a source of protein.

Then there’s beef jerky.  I have plenty of it.

It not ideal but protein is important so having beef jerky on hand isn’t the worst idea in the world.

Diets don’t exist and I’m perfectly okay with it.

I will say that this whole experience has been one of the most stressful things I’ve ever gone through. It’s the constant changes and not knowing that is driving me insane.

In the interest of safety, I shut down operations for Gunderson Productions and 626 Press until at least Tuesday. The restaurant was closed Saturday and will remain so until an “all clear” is received. Likely sometime late Monday or Tuesday.

Now comes the waiting. I finished the last of my preparations by mid-afternoon and decided to relax by going to a movie. It sounds weird by with most places staying open until at least 7, it made sense to get out of the house for a bit.

I’ll be stuck here for the foreseeable future.

It was a complete ghost town when the movie let out. It was insane to see everything boarded up and ready for the storm.

Here’s a few pictures from my drive: 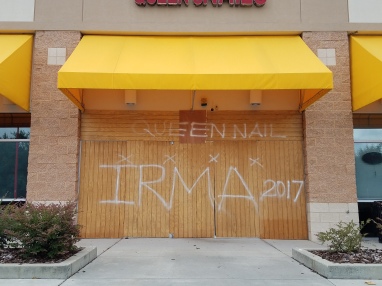 This is the worst part. We already have some wind here but the rains won’t be coming until sometime tomorrow and we won’t see the full storm until closer to the end of the day.

The good news is that Irma is shifting. But she’s quite literally the size of Florida so not matter where we are, we are going to see her effects.

With that, we wait.

3 comments on “Room at the End of the World”