Never Again; or, the Soundtrack to Your Break Up

Josh’s Note: The entry started its life as a chapter for my book “You’re Doing It Wrong” but it won’t be making the final cut. I didn’t want to just toss it away so I’ve transformed it into a blog post. To give some context to it all, I wrote this following a really nasty breakup with a guy who was cheating on me. Mentally, I took a really nasty turn and my personal life went to a dark place. I quite often use music as a release and naturally, during this dark time, I turned to my iPod to help me make sense of things. One song that really stood out to me to scream-sing was Never Again by Kelly Clarkson. This took me down a Kelly path. Once upon a time I had even told a friend who was going through a break-up to listen to the album “Stronger” on repeat. I was able to follow my own advice a dig myself out of that dark hole. Hopefully I can offer the same to those reading. For the record, the name I am using for my ex is Cawley and you’ll learn a tad more about that once we go to print with my book!

There is absolutely no doubt in my mind that Taylor Swift is an amazing artist. Love her or hate her, she is in amazing talent. I will be honest I wasn’t the biggest fan for a long time though I enjoyed a select few songs. It wasn’t until Speak Now and beyond that I really began to respect her as an artist, musician and human being.

Most people would think that Taylor Swift would be the one to turn to in time of intense hurt and heartbreak. Those people would be wrong.

If you’re my friend Leslie, the advice is always to pull on you Beyonce pants and move on. As I’m not willing to do the number of squats required for Beyonce pants, I’m going with someone who was rocking it before Beyonce called all the single ladies to arms.

My answer for any romantic situation gone wrong is one Miss Kelly Clarkson. Oh yes, the season one winner of American Idol is where you want to turn when your heart has been viciously ripped out of your chest and stomped on.

In 2007 Kelly released the album My December and was met with a pissed off record label and some fans unwilling to take part in this dark turn. Prior to the release of this album she had seen hits with ‘Miss Independent’, ‘Behind These Hazel Eyes’, and ‘Breakaway’. When she took a turn into some somewhat darker territory, people turned their backs to her and said, “No thank you.”

I will fully admit that when the album was released I wasn’t impressed. I purchased it out of my love for Kelly but I couldn’t find the time and place for the catharsis she was attempting to bring to me. That was, until my break-up with Cawley when My December found itself on repeat for more time than I’m comfortable admitting to.

I’ve said it before and I’ll say it again, nothing beats a good cry. Only thing better is angry crying while belting out ‘Never Again’ at the top of your lungs. Repeat this with the whole album until you’ve reached a state of mental ease.

MVP Song: Don’t Waste Your Time
MVP Lyric: “I don’t want your hand, you’ll only pull me down, so save your breath, don’t waste your song on me.”

Now that you’ve gotten the rage out, it’s time to start the moving on process. Because you’re better than that. It’s time to switch over to 2011’s Stronger album.

(Note: If you are going through a regular break-up you can skip straight to this album if you so desire)

This album has been my go-to since its release. Around the time it came out, two of my very good friends ended their four-year relationship. She was looking for marriage, family, settling down and he wanted to hang out and smoke pot. She came to me looking for guidance and I responded by burning her a copy of the CD.

When it came time to mend my own broken heart (and I had worn out My December on my iPod) I turned to this album next.

When I get super frustrated, angry, or stressed out my answer is usually to go for a run. This album has some great songs for running out your frustrations and moving on. The running helps you gain a sexy body to make the poor bastard ever regret letting you go.

Your “Ugly Crying” Song: Breaking Your Own Heart 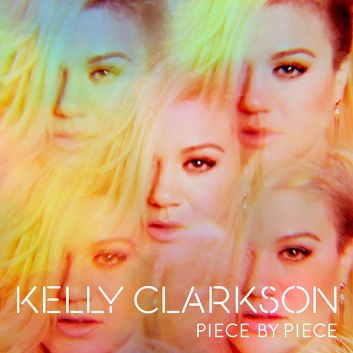 Feeling better? Good. Now I want you to throw in 2015’s Piece by Piece for a reminder that there are good guys/girls out there. You’re going to find someone that loves you, that cares about you, that will take care of you. They will make you feel safe and complete and hold you so tightly that all those broken pieces come back together again.

MVP Song: Second Wind
MVP Lyrics: “You can forget about me, while you were looking I was getting even higher. Say what you want about me, your words are gasoline on my fire. You can hate me, underestimate me, do what you do ’cause what you do don’t faze me. Just when you think I’m at the end, any second I’m gonna catch my second wind.”

Don’t think for a minute I’d forget about the other albums in Kelly’s catalogue of amazingness.  Here are some bonus tracks to add into the mix.

Your “Cry It Out” Song: Behind These Hazel Eyes
MVP Lyric: “Now all that’s left of me, is what I pretend to be. So together but so broken up inside.”

Your “I’m Pissed” Song: Gone
MVP Lyrics: “Your eyes, they sparkle, that’s all changed into lies that drop like acid rain, you washed away the best of me, you don’t care. ”

Your “I’m So Over It” Song: Since You’ve Been Gone
MVP Lyric: “You had your chance, you blew it.”

All I Ever Wanted

Your “Ugly Wine-Induced Snot-Crying” Song: Cry
MVP Lyrics: “Is it over yet? Can I open my eyes? Is this as hard as it gets? Is this what it feels like to really cry?”

Your “Dancing Around Your Apartment Singing Into A Water Bottle” Song: Miss Independent
MVP Lyrics: “If you wanna use that line, you better not start.”

I’m not going to say this will work for everyone but it was Kelly Clarkson who got me through the toughest time of my life so far.

1 comments on “Never Again; or, the Soundtrack to Your Break Up”