Today I Am a Pod Person

Let it be known that I travel. A lot.

I have been lucky enough to have a job that offers me the opportunity to explore the country and visit new and exciting places.

Side Note: For those that don’t know, my primary job is as an Anti-Bullying/Social Media specialist. I spend a large amount of my time traveling the country and working with students, parents, educators, etc on issues surrounding social media and bullying. You can check out my web site here or my professional blog here!

When I started this adventure back in 2009 I had no idea where it would take me and now, in 2017, I have been to almost every state in the US.

While every trip isn’t a grand adventure, it’s all still too exciting to be bored with.

As a result of being on a plane almost weekly, I have naturally racked up a number of frequent flyer miles.

That is a lie.

I spend them like it’s my job. Earn the miles for work, spend them for play. And by play I mean go to California. And by California I mean Disneyland.

When I first started travelling, I would just use Expedia to book flights and go with whatever was cheaper. I enrolled is just about every airline’s loyalty program and would be earning miles every time I flew, regardless of who it was with.

Eventually I flew with US Airways enough that I had earned elite status and they soon became my go to. Moreover, I had found out which airlines I despised and which I loved.

It reached the point where it made sense to stick with one airline and continue to build status and as I had the most miles with them.

I had no idea that complimentary first class upgrades were a thing until it happened. I had checked in for a flight and noticed my seat had changed. I was annoyed until I realized it was in first class. I was like, “woah, best mistake ever!” 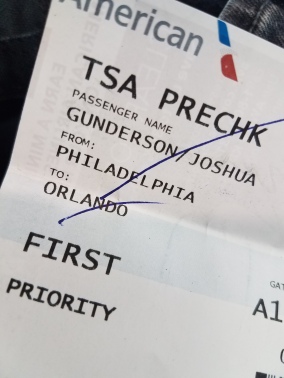 Then it happened more often and I realized I wasn’t special, I just spent way too much time on airplanes.

I swear there is a point to all of this.

Once US Airways merged with American Airlines, the upgrades became fewer and further between.

At the end of the day, I honestly don’t mind where I sit as long as I get to where I’m going. First class is great because of meals on longer flights, a little more legroom, and you feel less crammed.

With the merger, upgrades became a pleasant surprise again.

Today was one of those days.

I checked into my flight and saw that my seat had been changed. At first I was annoyed because I was in an aisle and I DESPISE aisles, but then I realized where I was. More so the plane we were going to be in was an A330.

If you’re not familiar with planes, the A330 is a larger one, typically used for longer, international flights.

I LOVE THESE PLANES.

Because I get to be a pod person.

The seats in first class are basically little nooks of happiness with your own TV, reading light, etc. Your seat can turn into a bed which would be more exciting if this flight wasn’t in the middle of the afternoon.

Seriously, where are these planes when I’m on a redeye flight? I might actually sleep for once!

As tempted as I am right now to sleep, I’m opting to stay awake to write this and watch Doctor Stange. I also know if I nap right now I won’t sleep well tonight.

Seriously ya’ll, I am a child.

So I guess my point is that I got to be a pod person today in my little zone of happiness.

As I write this, I seriously can’t help but wonder why anyone reads my nonsense. I am sure if I tried hard enough I could come up to a point to this but I don’t have the energy.

I suppose the moral of the story is that if you fly a lot, pick one airline to stick with. Find what you love and roll with it.

It varies for everyone. Erica sticks with JetBlue. I’m, personally, not a fan of the Blue but it works for her. Carmela uses Southwest and more power to her. My anxiety can’t handle anything about Southwest so I avoid them like the plague.

Frankly, I enjoy just being a pod person… while I can.

1 comments on “Today I Am a Pod Person”

There was an error retrieving images from Instagram. An attempt will be remade in a few minutes.