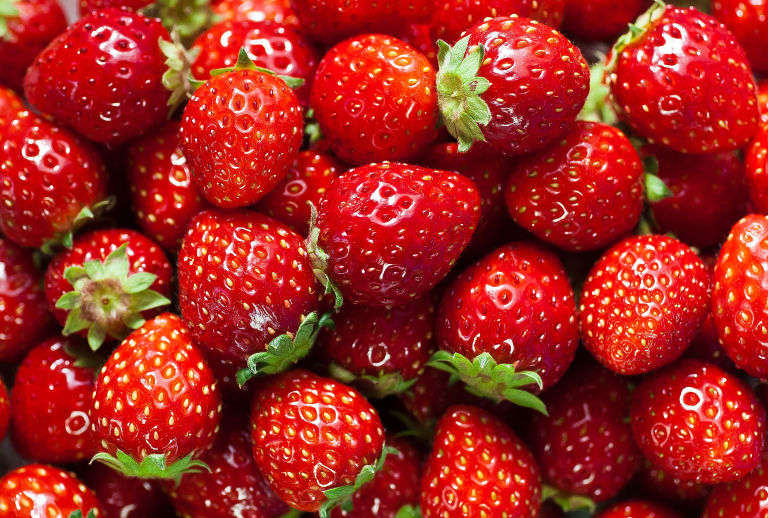 Last weekend I returned to Plant City for the Annual Strawberry Distance Challenge presented by Astin Farms. This is my third year taking part in the event and it’s one of my favorites to take part in. With the run taking place in early February, it’s at a great point to get my head back in the game. I’ve been on “race rest” since the Star Wars Light Side Half Marathon in California. It felt great to get back out on the course with other runners.

The race start time was a pleasant-ish 7:30 which means I had some time to sleep in before heading out to the race. Know that for me, sleeping in for a race is waking up at 5:30.

I made the quick trek to Plant City and picked up my bib and shirt from the registration tent. It was a rough 57 degrees out which made for a chilly start to the race.

One thing to note for this race is the start line is a bit of a walk from the main race area. Something to keep in mind when participating. Arrive early enough to pick up your packet if you’re a “day of” person like me and give yourself time to get to the start. I had to trek back to my car to drop off my race shirt and stop in the bathroom before the start. On the plus side, all the moving around kept me warm.

For this year I did notice some quick differences from prior races with the Challenge. There was no start mat, which meant the race would be gun timed rather than chip.

Side Note: The Difference Between A Gun Time and A Chip Time In Racing

In racing you will quite often hear and see the terms “gun time” and “chip time” in regards to official results of a runner. The gun time is the exact moment the race starts and the clock begins. For a gun-timed race, regardless of when you actually cross the start line your time begins the moment the race does. This isn’t always the best, especially if you start in the back of the pack. You could have up to a minute or more added to your time because of this.

In chip-timed race, your personal clock won’t start until you do. The mats you see at the start line are for timing and your official time begins once you cross the mat. Many results will show your chip time compared to the gun time but the chip is the one that will reflect your official results.

Knowing the crowd of this race I seeded myself at the front of the pack. This gave me the opportunity to start with the gun and get out on the course faster.

The past two years I had run this race I had placed in my age group so I had set my sights on doing so again. This meant starting stronger than I normally would and working hard to maintain.

This would have been a great tactic had I learned to properly tie my shoes as a child. 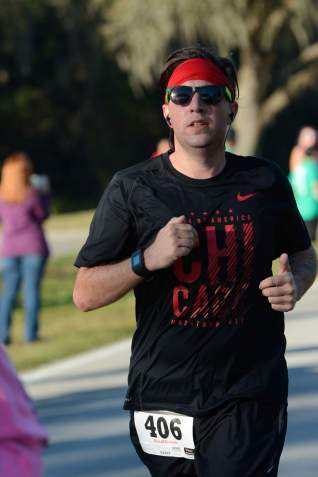 Less than a quarter mile into the race my right shoe came untied. I was able to push through until it became too dangerous to try to continue with my laces flapping around. I pulled over, tied and pushed on. With frozen fingers this took time and cost me seconds.

All was well as we pressed on until my left shoe decided to join in on the fun.

I was not thrilled.

One big issue I had on this course was the lack of water stops. All said and done there were three and frankly should have been more. I will note now that the good people of Astin Farms have already taken this into account to correct for next year. In a post-race email the made mention of reviewing the number of water stops available.

The reason this was an issue was because of how easy it is to become dehydrated on course in a cold race. Despite having hydrated leading up to the race, the cold made it hard to determine if I was properly hydrated. This lead to me feeling like crap a chunk of the way into the race and once I hit the finish line.

Into Mile 2 of the race I noticed an interesting problem. The mile markers weren’t matching the distance.

What I mean is that once I hit Mile 2 on the course I had already hit it on my FitBit. Now, it is not uncommon for the two to not sync up when it comes to races. There are a lot of factors that could add steps to your distance and throw you off. Weaving in and out of other runners, running off tangent, or pulling over to tie your damn shoes.

I ignore the slight for the time but had a huge issue when I was measured at 4 miles when I passed the 3 mile marker. This lead to a giant mind-melt that made wanting to push through almost impossible. I was so annoyed that I started to lose my drive for the race because as far as I could tell an extra mile was about to be tacked on to my race.

Now, my FitBit has jumped miles before and I’ve been able to deal but that was on longer races. To make sure I wasn’t crazy I asked a nearby runner if she was having the same issue. She said she was and was just as annoyed as I was.

Now I have run this course before. This was the second year of the 10k and so far everything matched up so I was able to figure that whoever marked the course did it very wrong. A short while later the 10k course met up with the 5k which had started afterwards. The first 5k runner I spotted with a tracker I asked where she was distance wise.

Her distance was also a bit off but I was able to figure it all out and that I would be finishing with a somewhat accurate distance. (My fitbit measured in at 6.34 which makes sense considering my stops and some weaving- never expect your race distance to be perfect. It rarely happens).

The finish line for this race is a mix of a tad boring and somewhat fun. Now I will never compare a local race to a RunDisney finish because that’s not fair to anyone but I will compare them to each other.

For the Strawberry Challenge runners are treated to fresh strawberries as well as bananas to munch on while waiting for results. There’s also the staples of water and Gatorade. There is nothing better than a fresh strawberry after a race if I’m being honest. The problem was they were gone rather fast.

I would have liked to see a little bit more in the way of food options post race but at the same time this is one of the cheaper races out there so you can’t ask for too much. I am making note to bring some snacks along in the future as I was starving by time I left the race following the awards.

Another difference this year was apparently the timing company who were either having problems with tracking or something else because results weren’t being posted as you would normally find at a race. This lead to a long line of people leading up to the official timer wanting to find out their results. I really just wanted to know if I should be sticking around for the awards or not.

After a long wait I found out that I had placed second in my age group which was exciting but I was annoyed and tired and sweaty at this point so I found it hard to be excited. I owe an apology to the gentleman who was standing behind me who offered congratulations and I just kind of walked away.

He also had really pretty eyes so I has a tad awestruck and couldn’t form real words anyway.

He also placed in his age group.

The post-race email did make mention of the timing company as well and I’m hoping we’ll see a return of old practices for next year’s race. This also includes a 5k mat or “cheater mat” halfway through the course. This is something that ensures that course-cutting hasn’t occurred. The Challenge is a turnaround course for the 10k which means there’s potential for cutting the course short and cheating.

I stuck around for the awards and received my additional medal and a hug from Mr. Strawberry and struck out for home. 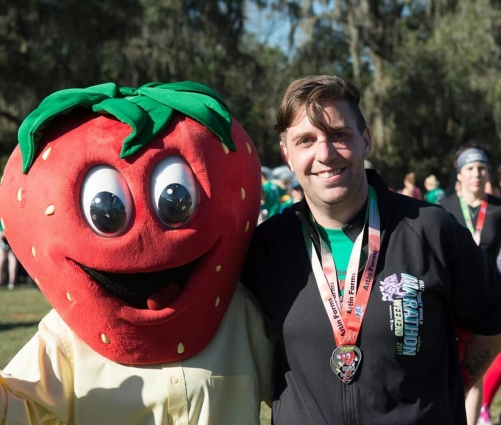 If you are close to the area I would certainly recommend checking out this race for 2018. The course is nice and flat and the race is on the smaller side which is nice when you want to get away from the madness of tens of thousands of people you’ll find at Disney Races.

I look forward to getting back there next year!