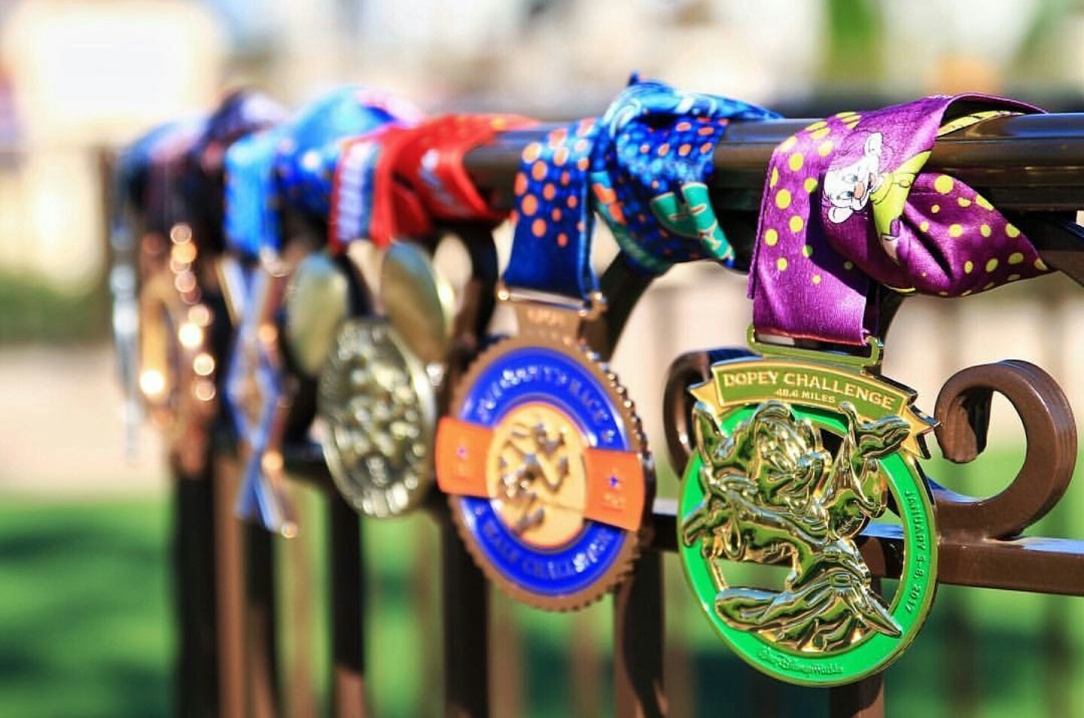 With the elimination of the half marathon on Saturday, I woke up on Sunday ready for a race.

True to Josh fashion, I got zero sleep the night before the race and ended up watching Disney movies until it was time to get out of bed.

My pre-race nerves are annoying sometimes.

As Erica was stuck with us until later Sunday night, she joined me. With traffic we got to the start with just enough time for me to give her a quick hug and head to my corral. Something to note for next year. Leave earlier. Which means waking up earlier. Oiy.

For the half and full marathons the corrals are in a different location and you’ve got a bit of a hike to get there. Something to note for those who haven’t run them before. Plan some extra time to get there. I walked into my corral just as the first wave of runners was being sent out.

I have no words to describe just how cold it was out there. I showed up to the corral wearing layers. A pair of throwaway pants as well as a hoodie I wasn’t going to be sad about parting with. Disney, like most major races, donate throw-away clothes so that’s something positive.

I shed my pants just before the start since those would be the hardest to remove comfortably on course. Plus they were a size too big and would have been annoying to run in. My hoodie made it about a mile in before I got too annoyed to keep it on.

I embraced the cold. Unlike Elsa, that shit bothered me. But it made for a comfortable run so I owned it.

As I’ve mentioned in previous posts, I was not running this race for time at all. I’m happy with my 5:29:31 as it was fast than last year running this race non-stop. This year, I made ALL THE STOPS! With the cool temperatures and a clear head, I probably could had pushed for a new PR but I wanted to have some fun so time wasn’t a concern at all. I had even told Erica I was planning on a 6 hour race.

Just after Mile 1 there were stilt walkers from the Move It, Shake It dance party and two of them were friends. That really makes for a great start to a long race. Familiar faces and great words of encouragement.

Heading toward Magic Kingdom there wasn’t much going on but as we entered the parking lot we were met with Lightning McQueen and Mater from the Cars movies. My friend Monica was attending them and taking pictures for runners. I got a great hug from her before I continued on my way. 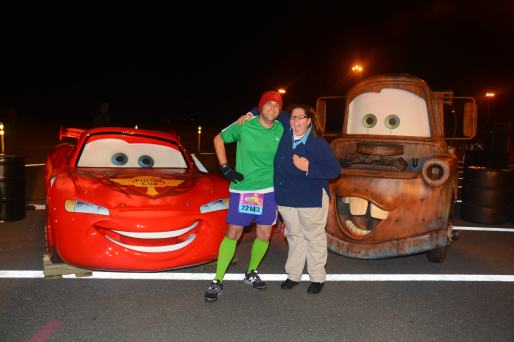 It wasn’t long before the next photo stop presented itself and it was Jack and Sally from Nightmare Before Christmas. The stopping and waiting in the cold wasn’t ideal but I was having fun so I didn’t mind it.

Right about the 5k mark I spotted Erica in the crowed at the Ticketing and Transportation Center. I stopped for a hug and to complain about the cold. She told me to suck it up and that was that.

Once in Magic Kingdom I wasn’t enticed by any of the photo offerings until the chance to stop in front of Cinderella’s Castle. You bet I was snagging that one! 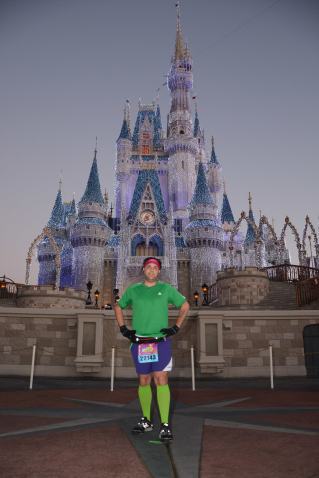 I ditched my hat at this point as well as I felt comfortable without it and I carried on.

The Country Bears were out for a photo-op so I made the pit-stop to say howdy.

The next stop came backstage where we were met by one of the parade floats from the Festival of Fantasy Parade. I couldn’t resist so I jumped in line for the photo. I regret nothing. 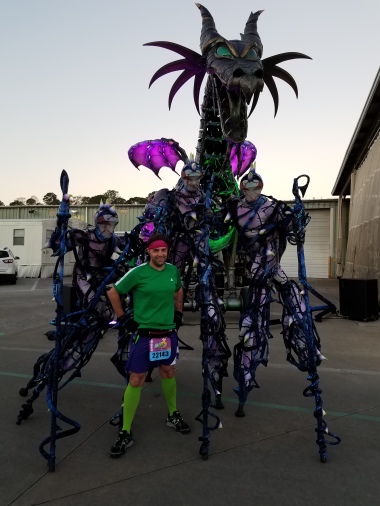 We headed out for the trek to the next park, Animal Kingdom. There were some fun photos along the way but the one I was looking forward to the most was the cast from Festival of the Lion King. I love that show! I knew two of the performers who were there for the photo and that, again, made for a great boost to continue on the race. 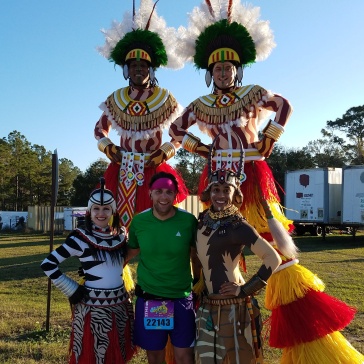 The halfway point came within Animal Kingdom and I was feeling great.

This was leading to my least favorite part of the course. ESPN.

Just about anyone who runs this marathon will tell you how much they hate running through ESPN and I am no different.

Normally in marathons I hit the wall around mile 17 which is right about when we were entering the Wide World of Sports. I was feeling great and was only dragging a little.

I passed up the chance to meet Mickey and Minnie and opted for Donald Duck who was hanging out with Chip and Dale. Three of my favorites in one stop? Absolutely! 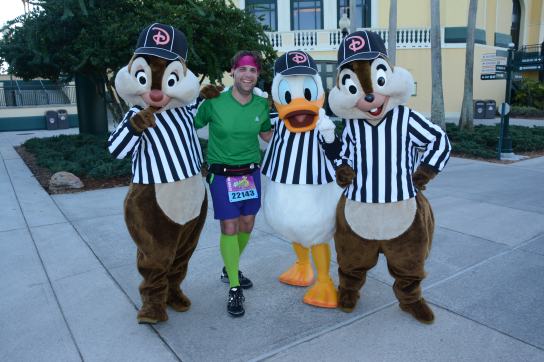 One driving factor in getting through ESPN was knowing my friend Colleen who works entertainment for Disney, would be out there as part of a cheer squad group.

I spotted her immediately and ran up for a hug. That was just the boost I needed for the last five miles of the race!

Away I went to Hollywood Studios. Entering the park, I was surprised to see a photo-op for Oswald the Lucky Rabbit. He is NEVER at Disney World so naturally I stopped! Just after his photo, at mile 23, the folks from Orlando Track Shack were handing out candy. I snagged a bag of M&Ms and was so happy. 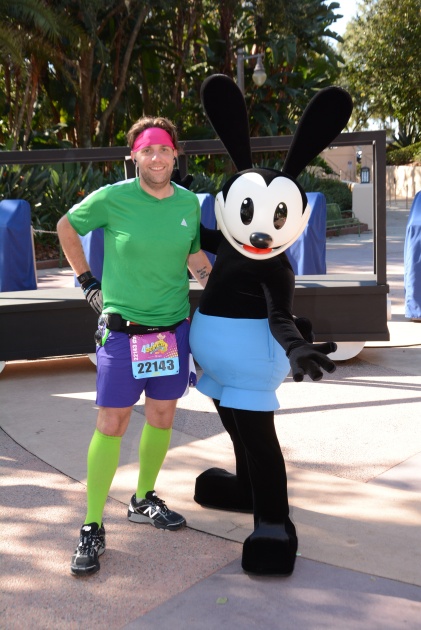 Right until I entered the park and a rude pedestrian ignored the rules and ran into the road and into me. In the bustle, I lost my candy.

For the second time this weekend, I cried.

The final mile of the marathon is right through the world showcase. What’s great is there are still character stops and they are only available to runners and since it’s the end of the race, no one is stopping. Poor Belle was just standing there cheering on runners. I noticed her too late but was able to stop for Snow White so… winning.

Andy and Erica were waiting for me at Spaceship Earth for a big hug right before hitting the finish line.

I received my marathon medal and headed to the challenge tent. First we received the half medal followed by Goofy and Dopey.

It was a tad bittersweet receiving those three medals simply because I didn’t really get to experience the full challenge.

Andy, Carmela and Erica joined me in the parking lot as I ate my snack box. In that moment the collective decision was made that all four of us would be signing up to Run Dopey in 2018. 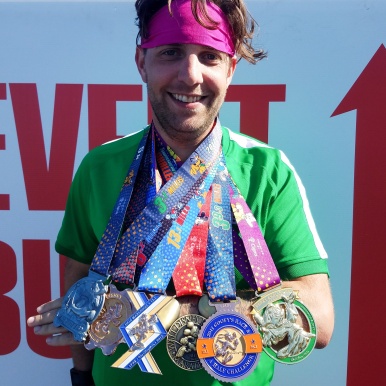